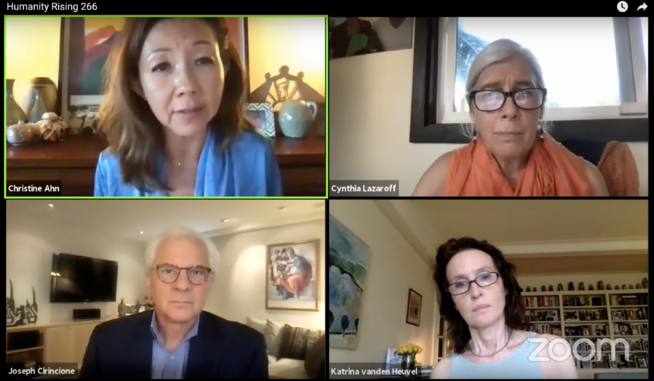 At a time when former U.S. Secretary of Defense William Perry says we are at an even greater risk of a nuclear catastrophe than during the Cold War, experts Christine Ahn, Joe Cirincione and Katrina vanden Heuvel join moderator Cynthia Lazaroff for a conversation on Biden’s foreign policy, highlighting the high stakes in relations with nuclear adversaries Russia, China and North Korea and the dangerous decline in dialogue and diplomacy.

Our experts will sound the alarm on the militarization of U.S. foreign policy, the human and financial costs, the Biden Administration’s proposed $752.9 billion defense budget – an increase from the Trump years – along with the Administration’s commitment to proceed with the estimated $1.5 trillion modernization of America’s nuclear arsenal over the next 15 years, which many experts believe will actually increase the risk of a nuclear confrontation. As we face the existential threats of climate change, the pandemic, and many other urgent global challenges, our experts will explore the disconnect between Biden’s domestic and foreign policy, the true meaning of security, and opportunities to transform U.S. foreign policy to advance peace and security at home and around the world.