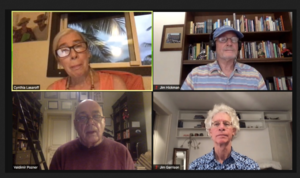 Veteran Journalist and Bestselling Author Vladimir Pozner on the Stakes in U.S.-Russia Relations, the Role of the Media, and Citizen Diplomacy

One week after the U.S. election, veteran journalist and best-selling author Vladimir Pozner considers the state of U.S.-Russia relations, how we got to where we are today, and where to go from here, highlighting the challenges, opportunities and stakes in the relationship between the two countries that still possess over 90% of the world’s nuclear weapons.

In this conversation with old friends Jim Garrison, Jim Hickman and Cynthia Lazaroff, Mr. Pozner will share his insights and wisdom on the role of the media, citizen diplomacy and the U.S. and Russia’s shared interest in overcoming their differences to address the most urgent problems of our time – climate change, the pandemic, nuclear weapons and more.