Revolution of the Mother:

A dialogue with Eve Ensler (V) and Andrew Harvey 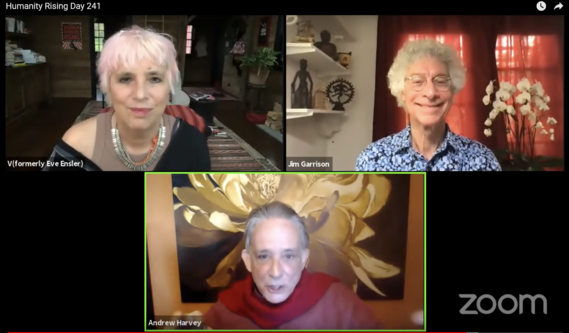 Patriarchy, capitalism, and racism are destroying the planet. We are in a hurricane of interlinked crises, a global dark night that threatens human extinction. A great force of radical regeneration—the force of the Divine Feminine—is arising to bring revelation, hope, joy, and fierce passion energy to the work of building a new world from the ashes of the old.

The time for aligning with this potentially all-transforming force in mind, soul, and body and in putting love into action is NOW.

During this session, join these two great soul friends and passionate devotees of the Mother for a thrilling dynamic and practical exploration and celebration of this all-important revolution in human consciousness.

Among Harvey’s other well-known titles are The Tibetan Book of Living and Dying, edited with Patrick Gaffney and Sogyal Rinpoche; Dialogues with a Modern Mystic; The Way of Passion: A Celebration of Rumi; Hidden Journey; The Essential Gay Mystics; and Son of Man.

Harvey is Founder and Director of the Institute for Sacred Activism, an international organization focused on inviting concerned people to take up the challenge of our contemporary global crises by becoming inspired, effective and practical agents of institutional and systemic change, in order to create peace and sustainability.