How many of us, while reading an article, using a product, engaging in conversation, or falling asleep, have experienced that delightful bolt-from-the-blue flash of inspiration, the unbidden but marvelous coming to mind of an original idea? And how many of us have pondered it briefly, perhaps mentioning it to a friend, then consigned it to oblivion, assuming that if it really is a good idea then someone must already be doing it, or deciding that it would be fruitless to pursue it without certain resources? 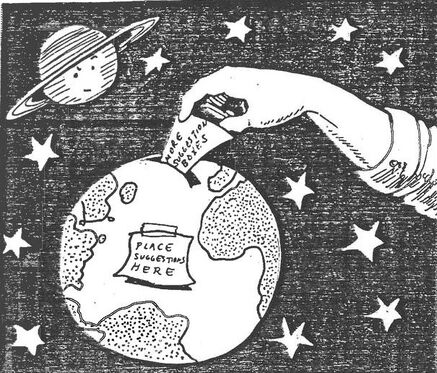 IDEA HUSBANDRY
There is a tremendous quantity of creative cognition going on out there. Ideas, insights, proposals and propositions which may be valuable to society come into people's minds by the millions. Many of them are available for development, free but for the price of giving public credit where credit is due. Their creative originators can't pursue or develop them because they lack the expertise, the confidence, the time, or the money. The result is ideational waste, and the thought came to me that we need to help one another cultivate ideas. I came to feel that "idea husbandry" is an idea whose time is at hand.

My dictionary defines "husbandry" as "the care of a household" as well as "the scientific control and management of a branch of farming." So it doesn't seem that far-fetched to stretch the notion of "raising something from a seed" to include raising ideas from conception to completion. One approach to this would be to organize a "global suggestion box."

I invite all of you to consider yourselves members of a team. We'll brainstorm about it; we'll attract interest in it; and together we'll implement it.

GLOBAL SUGGESTION BOX (GSB)
As our first concrete step, practically speaking, we'll probably establish a microcosm of the global suggestion box, i.e., an electronic bulletin board, a computer conference, or a "many-to-many" letter-writing forum, to gather ideas about it and stimulate interest in ways to make it grow. If even one computer network or information service carries this microcosm in the near future, then I think I can say that well have launched the global suggestion box (we'll call it GSB for short now).

We can shape the GSB category by category, in no particular order. Interested individuals, professional organizations, think tanks, schools, publishers, and other agencies can begin to collect concepts, ideas, and existing databases and contribute these to the GSB database(s) in their categories of concern. Eventually we can appoint or elect a single individual to manage each category in the system. At the same time, we can devise structures of sub-categories under the main categories. Also, it's likely that our idea-classification scheme will eventually use appropriate existing categorizing systems (e.g., the Standard Industrial Classification in consumer goods and services categories).

Ideas and proposals with distinct time value could be tagged "urgent" in the GSB. And we'll index ideas and proposals not only by subject, but also by the categories of people who most likely will find them interesting, e.g., types of organizations, or maybe even specific companies, agencies, and prominent individuals.

PARTICIPATORY IDEATION
The best use of the GSB would be someone's {e.g. an entrepreneur's) turning to the GSB, finding a hot idea, and launching it. Some of the would-be inventions, proposed innovations, and miscellaneous proposals in a GSB would be in final form or nearly so. Many others would be incomplete notions, mind prods for other people.

A GSB would implement "participatory ideation" comprehensively, coherently, and productively: It would give intelligent, interested persons a chance to participate in an ongoing synergistic cross-seeding of creative minds and its consequences. It would also motivate more creative thinking.

How might a GSB and its operation be made financially viable? A GSB should be able to sustain itself the way other commercially-accessible data banks do. Or the GSB might operate as a publicly-financed public information utility, perhaps under the auspices of one or more national or international government bodies or non-profit organizations. Since a GSB would be massive (the bigger, the more valuable), the cost would be considerable.

Realistically, a GSB or its like would start out with Americans, Europeans, and Japanese people working on it, if it's that broad. Or people in a Socialist or Communist nation, such as the People's Republic of China, could start it. If an agency of the United Nations participated, its scope would broaden more quickly. The more diverse and widely scattered the contributors, the better.

People of a single nation, e.g. India, or a closely affiliated group of nations, e.g., Scandinavia, who undertake a GSB, might legislate a public-domain status for ail concepts, innovations, and improvements on the system within their jurisdiction. Mass-copyrighted status might apply for people in any other country. The ideal, however, is a global international system whose entire contents stay in the public domain, with mandatory credit-where-credit-is-due.

SOCIAL INVENTORS, UNITE!
I am making this proposal as a rather frustrated idea-maker and "social inventor." For the past almost twenty years I've been hatching and presenting bright ideas only to see most of them languish for want of attention and interest. I send a letter and get no answer; ! talk to someone in person, and it leads nowhere; this has been the rule. I'm most happy to give my ideas away to people who can use them, but even that takes effort, time, and money. If only I could simply donate them to a GSB! Contributing an original idea to society would be so much easier.

We humans of the late twentieth century need to develop as many better ways of running the world as we can, as fast as we can. Ours is a time of massive problems and great opportunities, and both require of us that we pool our intelligence as effectively as we can.

Who wants to help make it happen? We need your creative concepts and bright ideas now!