Responding to Code Red for Humanity 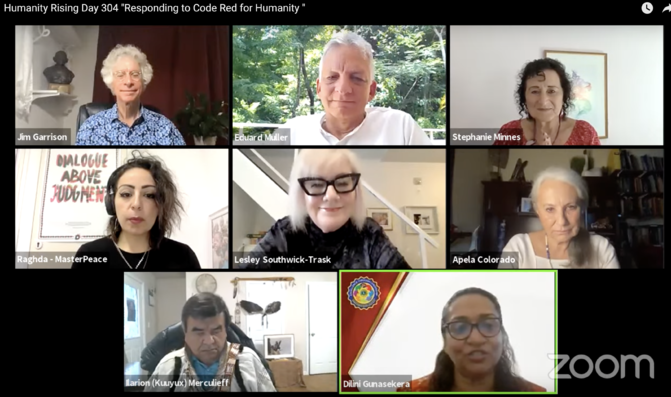 Our Earth’s climate is undergoing a shift of state. Extreme weather events have affected millions of people around the world as average global temperatures are rapidly approaching 2 degrees Centigrade over pre-industrial levels and CO2e in the atmosphere has passed 415 ppm. We are now entering the climate tipping point that scientists have been warning about for decades. Some scientists are predicting that humanity will experience an “extinction event” by 2026 (Arctic News) when global temperatures are projected to pass 3 degrees Centigrade in certain regions of the planetary ecosystem. Thousands of scientists have come out agreeing that the climate tipping event is imminent. The latest report by the UN Intergovernmental Panel on Climate Change states we have entered “unprecedented territory,” which the UN Secretary General says means “Code Red for Humanity.” We are in the grip of accelerating and increasingly lethal ecological turbulence. We have been teetering at the edge of the precipice for some time. Now we have officially taken the plunge. This is why we are in Code Red. This is the simple truth we must all face. We still can regenerate conditions for thriving life if we act now at the right scale.

As the climate shifts state, so must the global progressive movement. The millions of organizations that have worked tirelessly but essentially independently for a more equitable world must come together in an unprecedented strategic formation that draws all their strengths together at this critical hour. Only radical collaboration among those who understand the gravity of Code Red for Humanity and are willing to act collaboratively will suffice to save us.

In this spirit, the Global Regeneration Corps is emerging from the hundreds of organizations involved in Humanity Rising as a Call to Action to people of goodwill everywhere to come together. It is a unifying ethos to galvanize all citizens and organizations who are willing to face the Code Red emergency and rise to the climate challenge. The GRC does not belong to any organization. The GRC belongs to everyone as a global alliance, a global brand, united by a common purpose and a common commitment to collaborative regenerative action.